It was in late August that the world’s short attention span focused on a group of people fleeing Iraq and trapped in the Sinjar mountains. The group was the Yezidi people (Ezidi) and most people in the West had never heard of them.

The Yezidi people are one of Iraq’s oldest minority communities. The worldwide population is estimated at 700,000 people, with a majority of their population living in Northern Iraq. Persecution is not new to them – under Ottoman rule in the 18th and 19th centuries history records over 70 massacres. In 2007 Muslim militants carried out a string of car bombs against this minority community, with reports of over 800 people killed.

They are, and have always been, a marginalized group.

The long-standing persecution against this Kurdish minority group stems from incorrect beliefs about their religion. It is an old religion, a pre-Islamic sect that takes aspects of Zoroastrianism, Christianity, and Judaism.  They are said to be ‘devil worshippers’ because of their worship of a ‘fallen’ angel called the Peacock Angel, one of seven angels that dominate their religious world view.  They are declared infidels and with that, any protection is gone.

So what happens when an already marginalized group is displaced?

The world quickly loses attention. Memories of 40,000 men, women, and children trapped on rugged mountains unable to reach safety quickly fade, remembered only by those of the 40,000 who survived. Horrifying murders, including those of children, were reported in August and video footage shows a veteran journalist deeply affected when trying to rescue some of those who survived long enough to flee. “I have been in this business for more than ten years and I have never seen a mission as desperate as this, as emotionally charged as this, or a rescue as ad hoc or as improvised as this” said Ivan Watson of CNN.

Many were able to flee over the mountains, get safe passage through Kurdish areas of Syria, and arrive in Turkey, safe but displaced. Others are trapped on Sinjar Mountain, surrounded by militants with no escape in sight.

And the question now is “Who is coming for us?” They are the ‘forgotten ones.’

When temporary becomes permanent there is a peculiar pain and deep loss. They don’t want to go back to a place where centuries of persecution are embedded in their history, yet how do they move forward? What about homes? Schooling? Employment? They are suffering from a ‘deprivation of place’ and the wounds run deep.

Loss, trauma, and violence are in the story of every family and the number one medical complaint is “psychological.”

Yet the resilience of the human spirit shines bright in the smiles of children and teenagers, in the laughter of young men and older women. These are people made in the image of God. May they be protected and know peace. 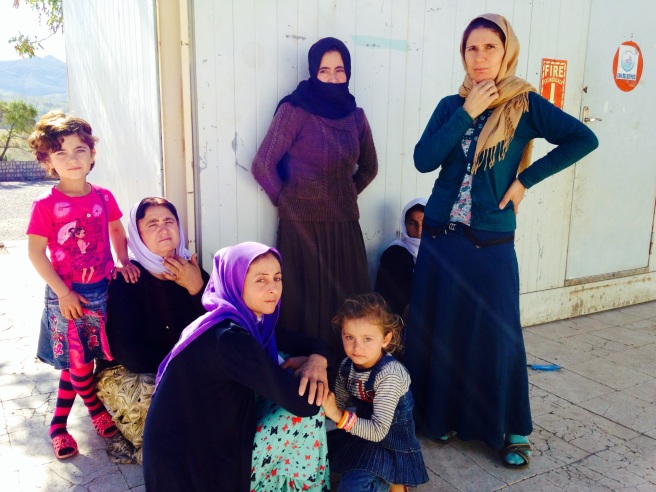 *A note on spelling – While many use the spelling ‘Yazidi’ the correct one seems to be ‘Yezidi’ or ‘Ezidi’ dropping the Y all together. I have used the spelling Yezidi in this piece but honor the other pieces in links by using the spelling they used.

Who, What, Why: Who are the Yazidis? from BBC News

8 thoughts on “The Forgotten Ones”