Yesterday I suddenly grew weary of ‘word clutter’. That’s when too many words and thoughts and ideas find their way from the abnormal glow of a computer screen or iPhone into my mind. From my mind they go to my heart and my soul. And yesterday I felt like there was, in the words of that great Ecclesiastical Teacher “Nothing new under the sun…”

So there are few words today. Instead I give you pictures of my world from a lit up Faneuil Hall downtown Boston to a family buying a frozen tree in hopes of holiday joy and white lights. May you find joy beyond measure this Friday — and may we all be free from word clutter. 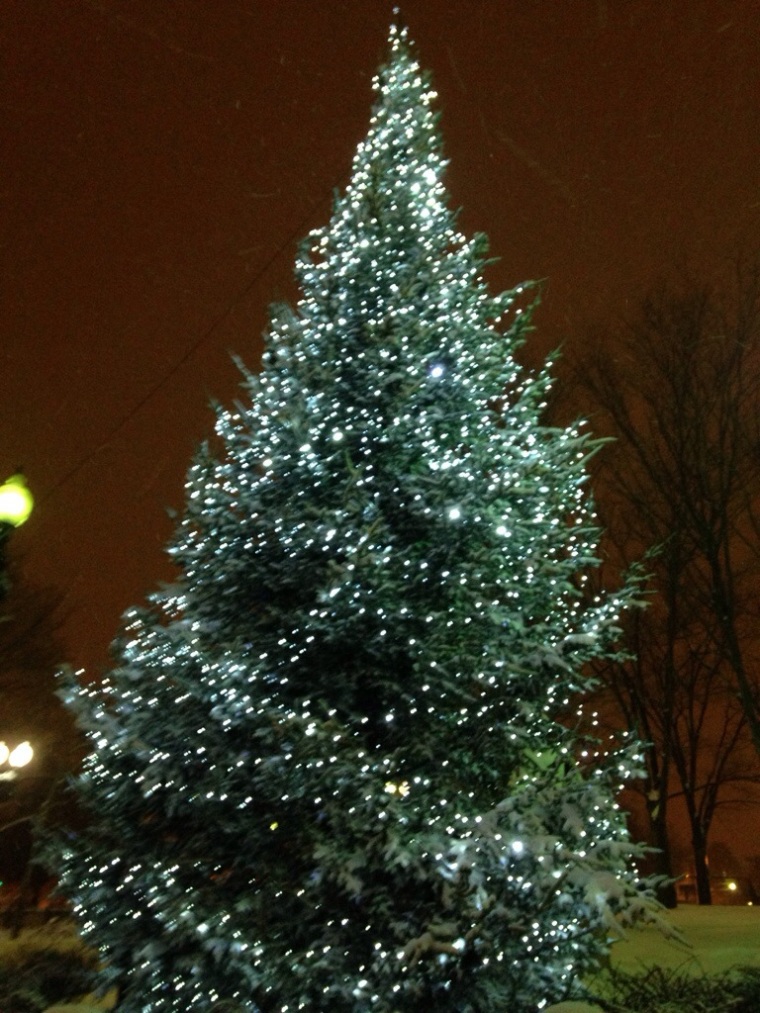 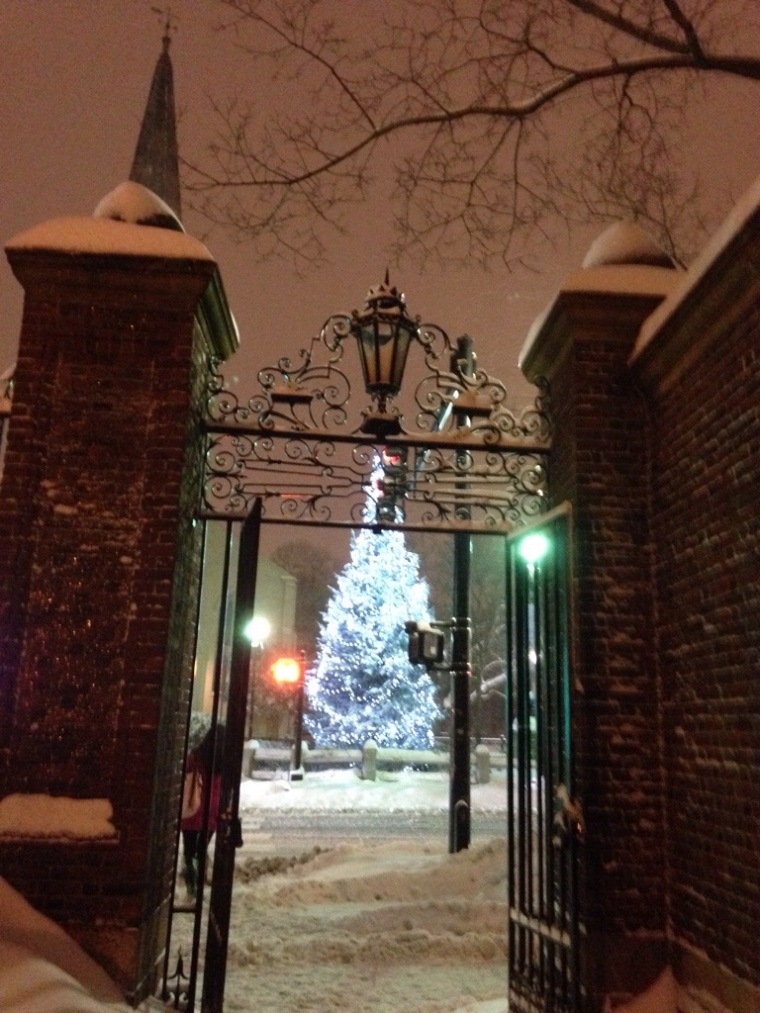 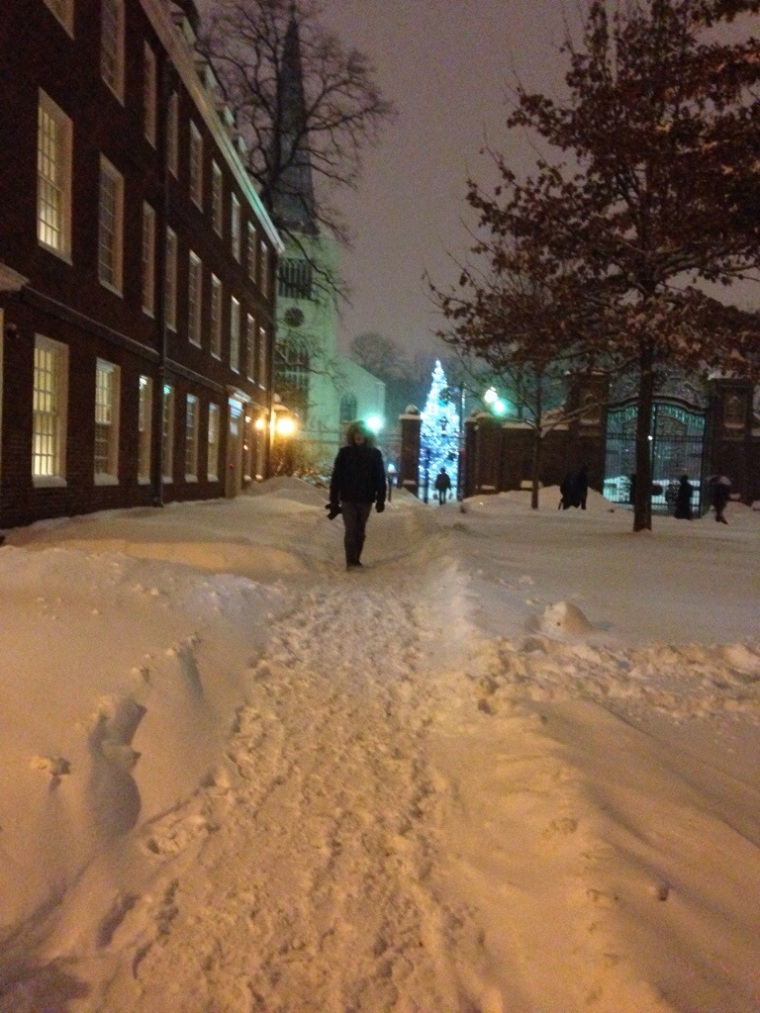 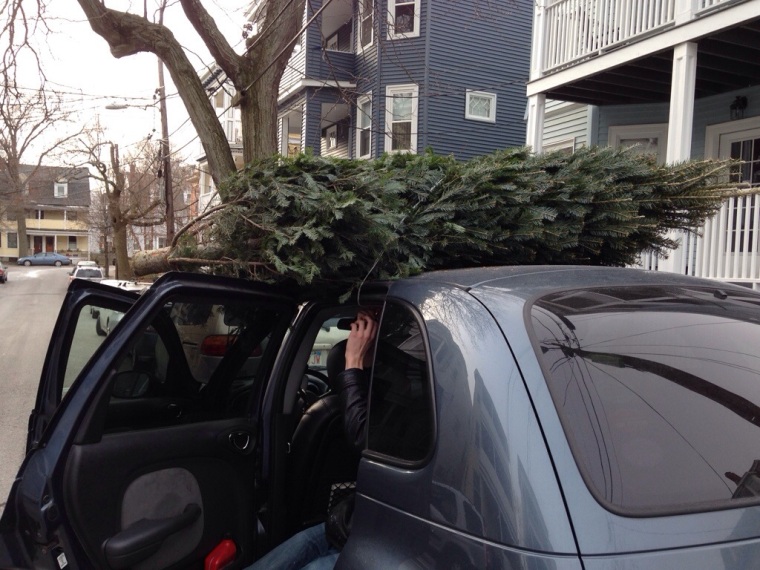 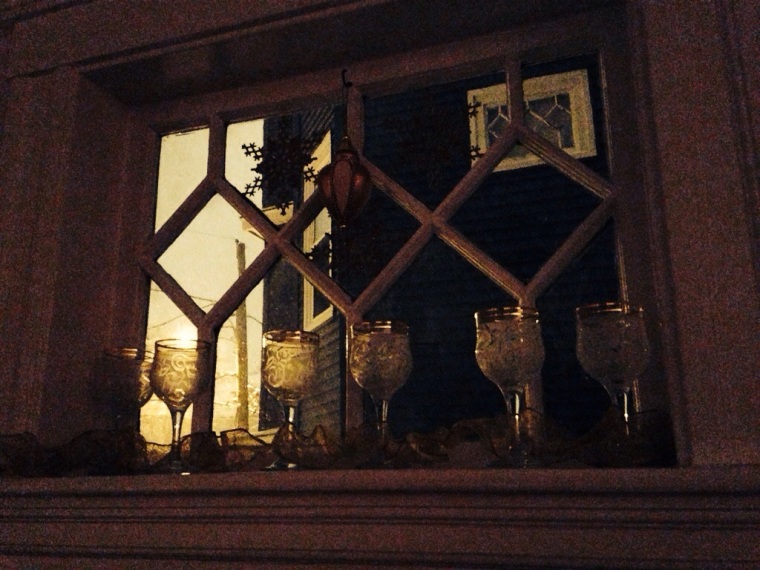 How about you? What images do you have to replace the word clutter? Share your images by sending them to communicatingblog@gmail.com with your name and a description and I will share them on Christmas Eve.

Barren, brown ground and leafless trees are my landscape as I stare absently through the bus window. I’m on my way to visit my parents, taking a Greyhound bus from Boston to Rochester, New York.  I am not a bus traveler, preferring the imagination that planes and airports afford to the bleak of bus stations, seemingly always in depressed downtown areas, where any attempts to make them nice feel thwarted by economics and defeat.

The landscape feels absent, void, lifeless. It is a picture of a world waiting.

And December, above all, is a month of waiting. Some of this waiting is hopeful and some of it is terrible. The hopeful waiting comes in white lights and kitchens that smell of butter and cinnamon, Carols that speak of a coming King, hushed churches filled with candle light. The terrible waiting comes in the form of diagnoses of cancer and news of death; in the people who still occupy the streets, despite cold and snow; in the knowing we are part of a world broken, not yet fixed.

Yesterday I found out that someone dear to me is full of the insidious parasite that goes by the name of cancer. I found out just as I was ready to board a crowded subway that would take me home at the end of a tedious workday. Tears filled my eyes, tears that I had to control because it wasn’t safe to cry. Not there. Not in a public space.

Later I heard the news of the death of Nelson Mandela, a man whose commitment to forgiveness and reconciliation was a challenge and model. A man whose death will be felt by his nation and the world.

If Shakespeare were to write a play about December it would be a mixture of tragedy and joy. Why is it that so much hard news comes in December? Why is it that this is when the body is found to be so full of cancer that a person’s lifespan is suddenly reduced to months not years? Why is it that marriages are at their most fragile during this time? Why is it that even as we wrap presents, we are aware that next year, the person we love will no longer be with us?

The calls for happiness that assault us from television screens and advertising seem at best irrelevant, at worst like a mockery of our grief.

So as I look out the window and see barren from a land that just weeks ago was filled with the brilliance of fall colors, I think of Advent. For Advent is about waiting, about coming, about expectancy. It is hope combined with longing. It is joy combined with sorrow. It is living between the already here and the not yet. Advent is December in all of its contrasts, all of its paradoxes, The sorrow is strong, but hope is stronger still.

No longer will violence be heard in your land,
nor ruin or destruction within your borders,
but you will call your walls Salvation
and your gates Praise.
The sun will no more be your light by day,
nor will the brightness of the moon shine on you,
for the Lord will be your everlasting light,
and your God will be your glory.
Your sun will never set again,
and your moon will wane no more;
the Lord will be your everlasting light,
and your days of sorrow will end.
Then all your people will be righteous
and they will possess the land forever.
They are the shoot I have planted,
the work of my hands,
for the display of my splendor.
The least of you will become a thousand,
the smallest a mighty nation.
I am the Lord;
in its time I will do this swiftly.”  Isaiah 60: 18-22

Note: Fridays with Robynn will be back next week. Robynn is in India and says this: “Tandoori Chicken from a street side food cart on day one. Taxi rides through crowded city streets on day two. Sweet reunions with wonderful friends. We are having, quite literally, the time of our lives! Thanks for your prayers and well wishes!”

The morning starts with a sun-sparkled ocean and coffee, strong, sweet coffee.

The weight and frustrations of the week are wrapped up and thrown out with yesterday’s kitty litter. Only one place for them to go – to the garbage, the grey, mud splattered trash can.

The restlessness, mistakes, disagreements – thrown out.

Today is a new day, a new time, an empty chalkboard. I look out at the ocean and cup my hands open – open to life, to God, to Joy.

And I remember to Breathe

No one who ever said to God, “Thy will be done” and meant it with his heart, ever failed to find joy—not just in heaven, or even down the road in the future in this world, but in this world at that very moment, here and now.~ Peter Kreeft on the topic of Joy

He was three or four years old, running with the confidence of the innocent on a sandy beach. Lite, curly, brown hair framed his face; a face brimming with smiles and laughter.

Off a heavy string floating behind him was a giant kite in the two-dimensional shape of an owl, its bright colors of yellow and green contrasting with the blue sky. It was held up by a mom who would not disappoint. His laughter, his joy was contagious. We laughed joyfully watching him.

He shouted at his mom and the wind carried the words to us, over the sand and the waves “This is the best day of the year flying a kite!”

He was three years old, holding up arms that were still ripe with toddler chubbyness – the perfect kind.

The hill was high and we had walked for some time.

Should I tell him?

Joel – I can’t carry you! Mommy’s tired, Mommy’s having another baby!

He stopped short, a grin of sheer joy spreading over his face.

He resolutely took my hand and together we walked the remaining distance to the large white house on the top of the hill.

Watching the little boy on the beach took me back 21 years to the time on the hill. Maybe it was the innocence, maybe it was the look of complete joy that brought back my son’s face to me.

When parenting brings heart ache or loss, or when you feel a wistfulness for what was, the unique closeness that we have with our children during childhood, it’s a gift to be reminded of the times of laughter, of pure joy. The times when you would not trade where you were and who you were with for anything in the world. The times when small hearts were easily satisfied, and tears healed simply by a mom or dad’s touch

When life gets complicated I want to have memories of best days of the year, flying a kite.

When was your best day of the year flying a kite? What memories do you have of your kids lost in complete joy?

The day time is busy. People, projects, expectations, tasks — they fall into each other like dominoes and there is no time to cry. This busyness, endless chatter of ‘must do’s’ – this is a gift. A gift that takes the mind off the dull ache of sorrow.

But the night does come. And when it comes and takes over, when you can hear a pin drop in the silence, when all is dark — that’s when the tears come. Fast and furious they come, with big gulps of silent anguish. Tears like Eustace in The Voyage of the Dawn Treader – dragon tears, hot and salty.

All over this city are those who cry in the night. All over this nation, this world, are those whose sorrow hides by day and cries by night. Whether hospitals or homeless shelters, brick mansions, or slum hovels, grief is no respecter of people or status. And God sees them all, knows them all by name. Calls them. Seeks Them. Sometimes even hunts them down.

And His Word whispers by day and shouts by night: Weeping may endure for a night, But Joy comes in the morning.*