Afghanistan. The land that has mystified and defeated would-be colonizers and conquerers for centuries, now on every social media account known to our current world. Suddenly, everyone has a friend in Afghanistan. It’s uncanny and a bit unnerving. They join others who have a friend of a friend of a friend in Afghanistan, creating an outraged public calling for compassion, open borders, and funding. Memes slap us in the face with their “Let all who want to leave, leave!” “Make room for all!” One does not need to ponder long the impossibility of that idea, yet I’ve not seen many challenge publicly the impossibility of it.

I’d like to spend a bit of time getting a perspective on all of this. Please hear at the outset that I am deeply sad and angry about the current situation in Afghanistan. From friendships with Afghans and those who have spent years living and working with Afghans (yes- I too am guilty of mentioning this…) to memories of vacations and school trips, Afghanistan has long been on my heart. After 20 years, one could argue that we should have known it was always going to be a messy leave taking. The question then becomes: “Did it have to be this messy?” But discussing our complicated foreign policy in Afghanistan is not my area of expertise. In addition, writing about the messiness feels singulary disrespectful to those remarkable people who have risked and lost their lives, and the many who have worked tirelessly to bring people to safety. For them alone I daren’t comment publicly. They are true heroes and know a courage of which I have little understanding. What I want to do is to give some perspective, something I work toward every day, so that is my desire here.

There has been an Afghan refugee crisis for many years with little attention paid to the problem, and even less accomplished in finding sustainable solutions. There is also a Venezuelan refugee crisis, a Syrian refugee crisis, and a Myanmar Crisis. Before the crisis, there was a crisis, and before that crisis, there was a crisis. It brings to mind the Haitian proverb “Beyond mountains, there are mountains.” This applies to Haiti and Afghanistan equally well, both nations crippled in crisis after crisis, both desperately needing stability and peace. This does not mean we should not pay attention – we should. And we should also recognize that this makes an already difficult crisis even worse.

As of June of this year, over 82.4 million people in the world had to flee their homes because of conflict and violence. Of those 82.4 million, 26.4 are refugees. Half of them are under 18 years old. In addition, there are millions of stateless people with no nationality, no border security, and no rights. When I say no rights, I mean no freedom to move, no access to healthcare or education, and no legal employment.

1 out of every 95 people has had to flee their home.

68% of refugees orginate from five countries: Syria – 6.7 million; Venezuela – 4 million; Afghanistan – 2.6 million; South Sudan – 2.2 million; Myanmar – 1.1 million. There are five countries who have been the major hosts of refugees: Turkey, Colombia, Pakistan, Uganda, and Germany. Geographically this makes sense – these are bordering countries and borders become more porous during major conflicts and disruptions. The majority of the world’s refugees (86%) are hosted in developing countries. Only 14% are hosted in developed countries. It really makes one question the words developing and developed, doesn’t it? If developed means decreased hospitality, inflated sense of self, and living out of scarcity instead of abundance, no wonder so many of us find the developing world so attractive.

So what of all this? Prior to all of this, those who work with refugees and displaced people were already working hard to serve and care for people. Resources have been limited for a long time and sustainable solutions were already difficult to come by. This current crisis will soon die down for most of us and a new season of outrage will be upon us, begging us to do our our part in performing for the crowd. But there are many who do this work year in and out, with limited funds and a lot of heart.

There are a couple thoughts I have on what we can do:

As I have thought about all of this in the last few weeks, the words of the prophet Micah have often come to mind. Micah was one of the original and true social justice champions, a prophet who cared about oppression, who cared about injustice to the poor, who cared about women and children cast out of homes. His was not an activism of social media, but a true heart for those who were hurt by false righteousness. He had harsh words of judgment, but those harsh words were always followed by faith that was practical and down to earth, by faith that invoked the beauty of a God of mercy. The people and the world Micah wrote to and about are not so different from the one we face every day. It is Micah that writes words that are heard through the centuries:

He has shown you O Man, what is good, but what does the Lord require of you, but to do justly, to love mercy, and to walk humbly with your God.

And that, my friends is perspective. May we do justly, love mercy, and walk humbly with God – only then will we have the wisdom to respond to any crisis, be it a refugee crisis or another that comes our way. Amen and Amen.

To make it easier to see the magnitude of this problem, I’m including a series of photographs.

Note: Primary source for all statistics is as stated on photographs – UNHCR

6 thoughts on “Before the Crisis, There was a Crisis” 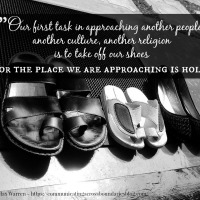