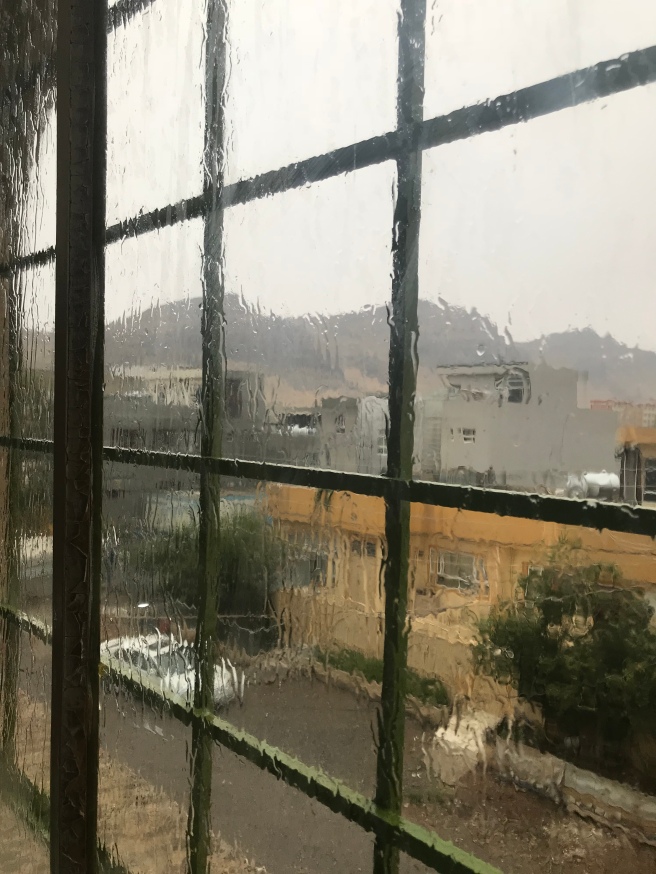 The rain came. One minute it was the hot, dry sun of a high desert and rays of light spread across my living room and peeked into the darkened hallway. I took a quick walk to our plant store nearby – we call it our arboretum – and walked back with a green treasure, its large leaves nodding to my step.

And then, the sky darkened, the sun hid, and the rain came.

It came in torrents over the mountain. Flashes of lightening lit up the sky in a diagonal angle. The raindrops beat against our window. The dry clay land filled with deep puddles and rain poured through a small hole in our window, flooding the glassed in balcony.

It came with fury and vengeance, as if to say “I will conquer this dry space and fill it with water! I will win!”

The rain came, and for a while I thought it would never stop. It felt impossibly strong. And then, just as suddenly, it stopped

One of my favorite Indian movies is the movie Lagaan. It is set in a small village in India in the late 1800s when India is occupied by the British. A British captain has imposed an outrageous land tax on the people of the village. It is a tax that is impossible to pay, partially because of a long drought causing huge economic losses for the villagers.  A young man in the village (Bhuvan) decides to rally the villagers to advocate for themselves. As they approach the palace, they observe a cricket match in play. Bhuvan mocks the game, and the British Captain offers a wager. If the villagers can defeat the British occupying forces in a game of cricket, they won’t have to pay taxes for three years. But, if they lose, they will have to pay three times the current taxes.

Bhuvan basically accepts the wager without the village’s consent and then has to rally villagers to create a team of people who know nothing about cricket with the hopes of winning a game against seasoned players. Throughout the film, there is a longing expressed for rain. No matter what happens, the villagers need this drought to end. People are suffering and the only thing that will change that is being able to bring in a harvest. At one point, black clouds roll in and a dance scene suggests that this is it, this is the moment. Rain is coming and no matter what happens with cricket or the British, this will be their salvation.

But it is a false hope. It doesn’t come. Then, at the very end of the film, after the drama of cricket and occupiers being defeated by the occupied, the rain comes. The rain comes in glorious, monsoon force while villagers dance in the downpour. The rain came. The game is over. The innocent are vindicated and there will be no tax.

The rain came on that village much the same way it came today. With a mighty force that can’t be stopped, with vengeance and sound that you can’t ignore; like an unexpected outpouring of grace when you think there is no hope, the rain came.

The prophet Isaiah talks about rain coming this way. In vivid poetry he says: “Drip down, O heavens, from above, And let the clouds pour down righteousness; Let the earth open up and salvation bear fruit, And righteousness spring up with it. I, the Lord, have created it.“* In Lagaan, that is what the rain represented. Vindication. A wrong confronted and made right. Justice finally came, and with it the rain.

Today, the rain came. And it makes me both tremble and hope – for justice, for wrong to be made right, for people who have suffered to be healed, for clouds to pour down righteousness, for grace to cover this hard, broken earth.

Today the rain came, and with it came life.

2 thoughts on “The Rain Came”