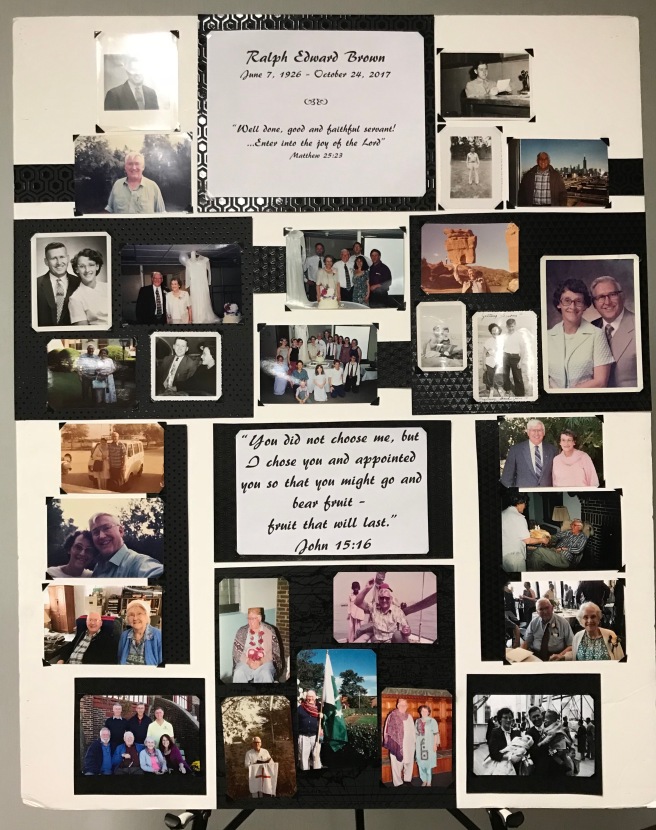 On June 7th, in 1926, a baby boy was born to a family in the city of Pittsfield, Massachusetts. He was fourth in the family, joining three sisters, a mom and a dad. Two years later his youngest sister was born and the family was complete. He was named Ralph Edward Brown and he is our father and grandfather.

His mother–the original Annie Hall–struggled to nurse him. He seemed unable to take either breast milk or regular formula and almost died. It was the milk man, aware of the concern of the family, who suggested to Annie that she try sweetened condensed milk. Having nothing to lose, she diluted this in a bottle and to everyone’s astonishment and as though ordained by God, he survived and thrived. All his life he claimed that he owed his love for sweet things to his early diet.

At four years old, tragedy struck the family with the death of his father during a hospitalization for a broken leg. Annie, left with five children and a broken heart, raised the family with grit and grace during an era when life was not kind to a widow and her children. He recalled a community of friends and relatives, many from Morningside Baptist Church in Pittsfield, who walked alongside the family during this time.

Ralph grew into a young man with a personality and character as large as his smile. He entered the Air Force branch of the military on graduation from high school, but instead of flying planes and braving enemy combatants, by his own admission he spent his entire military experience in bureaucratic paperwork, filling out tedious forms in triplicate. Two years later thanks to the GI bill he was able to attend Gordon College, at the time a Bible college in the Fenway area of Boston, and it was there that he met his life-long love, Pauline. Pauline evidently stole his heart after a couple of “Joyces” and perhaps a “Ruthanne” – he has never been totally clear on this. They were married in 1951, sixty six years ago this year, amidst mountain laurel and a host of relatives and friends.

They welcomed their first-born on March 16th, 1953 – a boy, Edward Ralph and a year and a half later their lives dramatically changed. 1954 had them taking a 3-week journey by ship to a country that would become their home for the next 35 years, the country of Pakistan. Ralph became as comfortable sitting cross-legged on the floor in a Marwari village and eating onion curry as he was preaching from the pulpit at Morningside Baptist, followed by a pot-luck church supper. Over the next few years, they also added Stanley, Thomas, Marilyn and Daniel, followed by seventeen grandchildren and fifteen great-grandchildren — so far.

In 91 years of life there are many stories. Some are known by your children, while others remain untold. If we wrote all our stories and memories, this memorial service would be tediously long instead of a loving tribute. But there are three things that our dad and grandpa has held to in his life. His love of God, his love of family and his love for fun. From his legendary ability to swish a basketball through the hoop from the midway point on the court to his absolute consistency in an alcohol-free lifestyle; from discussing ordination of women to discussing infant baptism; from his first granddaughter Melanie to his last grandson, Jonathan, he has remained a steady, Godly example and force in a world that often shifts with the wind.

During the nine months of struggle with the illness to which he finally succumbed, Ralph continued to treasure the friends, family, and all of the fellow believers who together have made a home for Mom and Dad here in Rochester.

While his last months were a struggle, he got to see his youngest grandson graduate from college, his granddaughter get married, and to see two great grandchildren that he hadn’t yet met.

Every night, his good night began with words of thanksgiving. And, while his last words were ’Tom, I don’t think I can make it’ (meaning to the breakfast table), we know that in those last steps and last breaths of his life, he was carried to eternity in the arms of his Lord. He lived out the words of one of his favorite hymns:

In Christ alone my hope is found;

He is my light, my strength, my song;

This cornerstone, this solid ground,

Firm through the fiercest drought and storm.

What heights of love, what depths of peace,

When fears are stilled, when strivings cease!

My comforter, my all in all–

Here in the love of Christ I stand.