I’m delighted to welcome Michael Pollock to my blog today! Michael is a fellow ATCK, but he’s also a friend and someone who “gets” this journey. Read more about Michael at the end of the post.

I was fascinated by Taiye Selassi’s Ted talk, “Don’t ask me where I’m from, ask me where I’m local”, which, if you’ve seen it, isn’t really about belligerence over a question of origin, as many commenters seemed to think. Taiye spoke eloquently and passionately about the challenge of highly mobile people to nail down the truth of our origins and belonging; in a sense, the places we own and that own us back.

Identity and belonging is not a simple or straightforward issue if you have moved multiple times throughout your life.  The issues are layered in complexity if those moves were also cross cultural as well as geographic. My own back-story includes 7
different towns/cities and 4 states in the US, a mission station in Kenya and the city of Tianjin in China. That’s not counting places I lived and invested for less than a year. And my story is simple compared to many.

Identity and belonging is not simple

Military, diplomatic, missionary and international NGO, education and business families all understand this well. Our ‘place’ memories are mosaics; the ‘people’ we belong to are scattered, though often inter-connected; and various possessions are strewn along our trail of travel the way American pioneers dumped European furniture to lighten their wagons. Personally, I still wonder who now rides my green Giant mountain bike that I left behind in Tianjin.

Taiye thinks being ‘from’ a country, which is a political idea, doesn’t make sense as the lines are arbitrary and can change.  She raised the point of politics and origin/belonging when she suggested that the question “Where are you from?” can also have overtones of power.  Being ‘from’ Germany, Britain, Japan and the US connote more power, while ‘from’ Brazil, Philippines, Liberia, connotes less power and some countries like China and Russia are more ambiguous. I think there is also a ‘social currency’ factor in which some places are more exotic and recognizable and some simply unknown to the person asking.  To an American, being from Thailand rather than Vietnam or Equatorial Guinea will have a whole set of different images and assumptions.  When your ‘from’ includes a list, how do you know where to start? (If you can’t place EG on a map, that helps prove my point.)

Taiye spoke of being ‘multi-local’ and gave three categories to help determine where that might be.

The three question grid helps determine where you are local and whether you are multi-local, as increasingly many people are.

So when our group of 15 third culture kids (TCKs) and adult TCKs (ATCKs) gathered in early March on the shore of Lake Michigan for a retreat, I asked them to share where they were local.
To warm things up, I shared how I had just come from a funeral service in a community in New Jersey, US, that I had not been in for 40 years. And yet I met person after person who had been part of my childhood there and who welcomed me and shared memories of my family and me. I felt a deep warmth, but do not have regular relationships or ongoing rituals there, so by Taiye’s equation, nice, but doesn’t count.

I asked them to share where they were local.

As our group began to share, an interesting thing happened, people spoke of cities and villages in China, Tanzania, Turkey, Jordan, Uganda, Bolivia, Nigeria and then they began to speak of houses. ‘ My grandmother’s house in Minnesota’ said one, and many agreed. ‘The guest house in Nairobi’ said another and stories were passed around by those who were familiar with its antiquated colonial regimen.

Encouraged, someone went further, more compact, ‘I feel local in the car, on the road between Colorado and Ohio’ and eyes lit up around the table. I laughed because an Australian mom in Wuhan, China had once told me that her children told her the only thing she must not sell, EVER, was their old Volvo with the leather seats. Never. It was the only consistent item in their Australian memory vault.

Then an admission, “I feel local and comfortable around certain pieces of furniture, because I used to have a strong link to my grandparent’s house, but they moved…I love their couch!” And a question, “Does anyone else feel this way?” And yes, there were many heads nodding and even some eyes glistening.

The turns came to my daughter, the youngest of the group, who shyly listed a couple of places on her storyline and then paused. “I also feel local in airports.  Any airport, really.”

Boom. “YES” went up around the table in agreement and laughter, and more stories.

We had left the thoughtful three R’s from Taiye behind, it seemed. What could a car, an old couch, and airports have to do with our rituals, relationships and restrictions?

Much, it seems. If I am in motion between stable points, I might feel multi-local, yes? But what if my stable points are not stable at all. What if my schoolmates from childhood all leave for various points of the compass? What if the community I grew up in is bombed or burned out or no one I know lives there and so it no longer exists as a welcoming lighthouse? What happens when that ‘one dependable summer visit house’ with all those treasured memories is sold? It seems that some global nomads struggle feeling local at all. Why is that?

Where are our regular relationships, our connections? All over the map, and still in motion. It might depend on the week, on the season. We track them with social media and when they disappear for a while, we look in familiar places for them to resurface.  We load into the car with the members of our tribe that we can gather and we stop in and visit the ones we can reasonably reach on the way to and from our destination.

Where do we hold our rituals? We try to carry them with us but we also recreate them as needed.  We find the old couch in our grandparents’ new house and snuggle in for cocoa and movies.  We run our fingers over the antique Chinese cabinet or the Masai stool and say our prayers with old friends.

And our restrictions?  Perhaps we find the most freedom in airports, those interstitial worlds where people are coming from everywhere to anywhere and our own possibilities are only held back by the encryption on our e-ticket. We might know that we can’t get to all of those familiar places and warm relationships because of limits in time, money and visas but we are Just. This. Close. Right through that gate.

So we might envy Taiye, just a little, with three places where her rituals, relationships and restrictions hold her in their warmth and familiarity.

And many of us continue to work to build our localness where we are, with what we have, and deep down, we long with all our heart and soul to be truly local somewhere.

Michael Pollock is  the founding director of Daraja, a TCK care and development initiative. He is a certified teacher and coach and holds a Masters in Education from Loyola University.  The founding Head of Cambridge School in Baltimore, he also spent nine years in China as school principal and founder of Odyssey, a TCK leadership formation organization. He and his wife raised three TCKs in China and returned to the US in 2012. They currently call Muskegon, MI ‘home’. 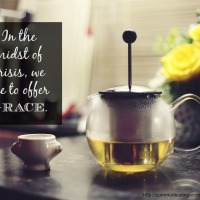