The lights dim in the First Baptist Church of Daytona Beach, Florida. Music begins to play, and the music director welcomes us to the service.

And then we begin to sing.

My eyes have seen the glory of the coming of the Lord.

We are singing The Battle Hymn of the Republic, a patriotic favorite that links parts of the books of Isaiah and Revelation with the American Civil War. A multimedia show of flags and stars swirls on the walls around us. We are mixing our Lord with our Flag and the triumphant tune and well-dressed choir begs us sing along with them and their red, white, and blue.

He is trampling out the vintage, where the grapes of wrath are stored.

I want to throw up my hands in frustration; my sense of being “other” is at its height. This God and country connection is too much — I can’t do it.

He hath loosed the fateful lightning of His terrible swift sword:
His truth is marching on.

The tribute continues with homage to the flag and an admittedly touching short video interviewing a gentleman who lost his brother to World War II. But I am still impatient, willing myself to be gone, challenging the God and Country patriotism that marks this part of the country, that marks a Memorial Day weekend. I miss my Orthodox Church and worshiping with people from Russia, Greece, Romania, Lebanon, Ukraine, Bulgaria, and more. I tap my foot, frustrated and caught up in my frustration.

Until I hear a motion beside me and turn to look. I am sitting beside my father-in-law and he has raised his hand to brush away the tears forming in his eyes.

My father-in-law, Richard Gardner, is a good man. He served in the US Airforce until retirement, including tours in Vietnam, Germany, and many parts of the United States. He worked hard, sometimes working not only his airforce job, but also another in order to provide for a family of five growing boys.

My father-in-law made sacrifices and so did his wife and family. His family felt the absence of a father during his tour in Vietnam. They moved across the country and the world, uprooting a family of seven many times over. Their orders came from a military machine and when they said go, you packed up and you went.

I struggle with the notion of Christianity as a political force that is uniquely American. I struggle with a definition that includes allegiance to a country and flag as opposed to what I believe is a transformative gospel, indiscriminately available to all people at all times. My faith has never been rooted in something as fragile as a nation.

“The identification of religion with nation and nation with religion is something Christians should avoid at all costs. It is a direct violation of the growth of a body in which there is “neither Jew nor Greek” (Galatians 3:28).”

But right now, that’s not what this is about. Right now, it’s about my father -in-law.

To my father-in-law, memories of the past are clearer than memories of yesterday. The aging process, that process that respects no person, but creeps in and takes over the wealthy, the poor, the strong, and the weak, is quickly taking over. I am aware as I look at him that he will not be with us forever, and a rush of affection comes over me for this man. I am convicted and humbled – my frustration fading along with the strains of the music.

As I put my hand on the man beside me, as I see his tears, and feel his poignant memories of times gone by, I realize that I can and I do honor this man and his service.

Because people and relationships are always more important than ideas.

It comes down to being capable of complexity; of recognizing that even as I disagree with the God and Country ethos that defines our military and much of our nation, I can and do honor the men and women who serve.

The hymn, video, and homage to the flag are over. My father-in-law still sits beside me, lost in his own world of memories.

The strains of the last lines stay in my mind, because I believe them. Not in the way that the author of the hymn intended, but in the way I know them to be true.

His truth is indeed marching on. And I am humbled by that Truth. 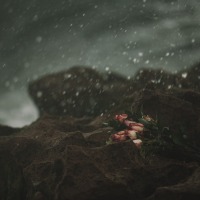 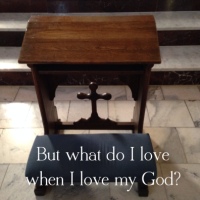