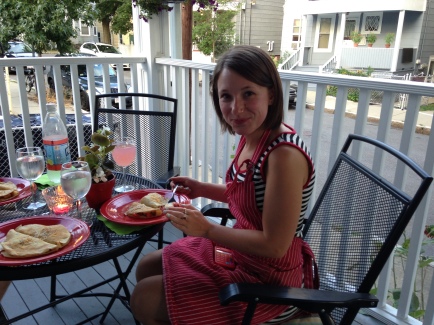 Our street is a short, one-way street, four blocks from the Charles River. It’s lined with three-family homes, built at the turn of the century as industrial housing for people who worked at factories and needed places to live. The street gets mostly local traffic and even long-time residents of Cambridge don’t always know where it is.

I love this street. There are families and single people, older couples and students. There are Greeks and Chinese and white Americans and more Greeks and more Chinese and then there are even more Greeks. There are those we’ve secretly adopted as grand children, and there’s an Ethiopian family around the corner with the cutest twins I’ve ever seen. We keep on trying to meet them but always end up too far away when they walk by. But one day….one day, we will accost them and find out their story. There is Maria, Carla, Peter, little Peter, Christopher, So, and the uppity couple on the corner.

My Chinese neighbor across the street will wander over to make sure I’ve picked mint in her postage stamp garden; my Greek neighbor will shout out “hello’s” and make sure that I pull close enough to other cars when I parallel park, admonishing me: “We all have to leave space for each other in the city!”

If you head down the street and make a left turn, then a right turn, you may run across Billy Davis. Billy Davis was born on that street and he’s now retired, in his late seventies or early eighties we think. He’ll tell you all about Cambridge in the old days. He’ll talk about how everyone got along: the Irish, the Italians, the Portuguese, all the immigrant families. He’ll tell you how he couldn’t misbehave because there were so many watching mamas on his street and they all had eyes on the kids in the neighborhood. He may do something wrong, but the minute he walked in his own house, his mom would say “Hey, what were you doing down at the park?” and it was all over. His stories need telling and we are eager listeners.

Walk over a block and you reach our neighborhood mechanic, Phil. He’s the best mechanic in all Cambridge and will give you fair prices and honest assessments of what’s wrong with your car. He’ll even make a house call if you really need it.

Walk the other way to Central Square and you’ll come across the Village Grill, run by Theo and Helen. It’s a small, local neighborhood restaurant with an extensive menu. Biting into a piping hot gyros or Greek Salad with grilled chicken, you will find it is worth every penny. You don’t just pay for food, you pay for conversation and it is always interesting. Theo and Helen are Greek as well, so the conversation occasionally turns theological, which means it turns Greek.

I walk out of the house on this Monday morning, and smile at my neighborhood. It’s going to be a hot humid day, and tonight will see many of us on porches, observing each other through porch railings and potted plants.

Because these are the people in our neighborhood.

Who are the people in your neighborhood? I would love to hear!

9 thoughts on “These are the People in My Neighborhood”

I’ve gotten on the Ted Lasso band wagon.⠀
More tea parties!
Winter is for tea parties and scones. For creating beauty and bringing hearts and souls together. For long days and nights of reading and puzzle doing.
The text messages began from Thailand just after midnight on February 15,2020. By 5 am, we heard that Stan had died. ⠀