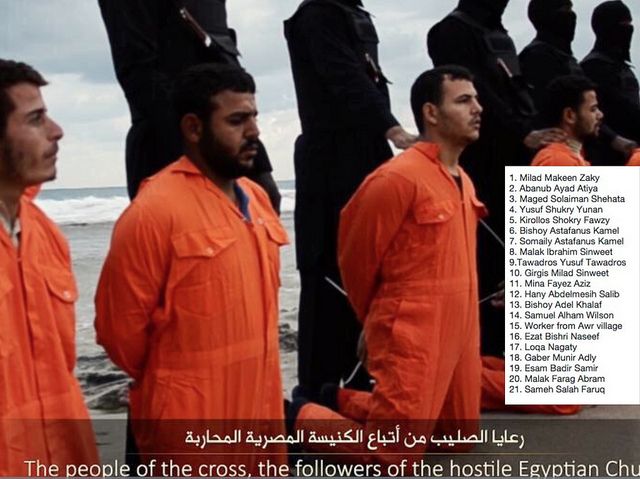 I look at the picture and read through the names. 21 in all. They feel familiar, though rusty, on my tongue. Reading these names, praying as I read them feels like the best thing I can do to honor these men.

The men were laborers in Libya for economic reasons. ISIS captured them because they were “people of the cross.” They are brothers and sons, employees and friends, husbands and confidantes. Each of the 21 men who died is known by name. And when we remember their names, we honor them.

The president of Egypt announced seven days of mourning for the nation and Christians and Muslims are coming together to grieve with the families of the victims.

Friends from Egypt sent out a message yesterday. They will be slowly visiting the families of the men who were murdered. They will sit and grieve with them; mourn the loss of these young men. And they will remember their names.

Last week in the city of Chapel Hill, three people were murdered. They were murdered in their home, their safe haven. Pictures show Chapel Hill to be a charming city, indeed those I know who have lived there love it. It is a university city, home to the University of North Carolina at Chapel Hill.

But three Muslims, one man and two women, were murdered by an atheist motivated by hate.

I read through their names slowly. Deah Barakat, his wife – Yusor Mohammad Abu-Salha, her sister – Razan Mohammad Abu-Salha. They are 23, 21, and 19 respectively. Deah was a University of North Carolina dental student. Reports say they were newly married, scheduled to receive their wedding photographs on the week they were killed.

They loved the diversity of America and were active members of their community. Yusor was quoted as saying this last summer: “Growing up in America has been such a blessing. It doesn’t matter where you come from. There’s so many different people from so many different places, of different backgrounds and religions — but here, we’re all one.”

Will you remember these names with me today?

6 thoughts on “Remember Their Names”