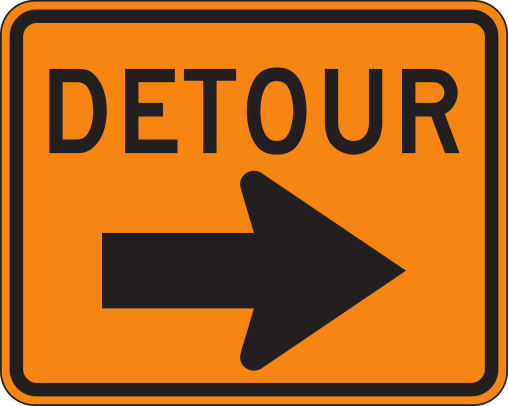 Respect the Detour by Robynn

Tuesday afternoon in central Kansas was nearly perfect! The sun was shining gloriously. The clouds were picture perfect. Autumn has already kissed the prairie grasses and they were beginning to turn into a thousand shades of glory. Returning from a session at the Kansas Leadership Center in Wichita my GPS and I were driving cheerfully along highway 77 toward home and family. My brain was swirling over the concepts I had just been introduced to at the center. My heart was contentedly happy.

Suddenly all of that changed at Herrington! There was a detour of perplexing magnitude. While I had moved smoothly toward the east and the north suddenly the detour signs indicated I should make a deliberate right angle turn toward the south. It was counter intuitive. It didn’t make any sense. I turned south, away from family, away from home. I started going, at the signs instructions, exactly opposite of where I wanted to go.

I told myself not to stress. The GPS didn’t help. She was apparently just as stressed as I was and was freaking out. Every few moments she suggested alternate routes across fields or by way of gravel roads that looked rather dubious. At one point her best guess was to turn left in point three miles into a rundown farm yard. That didn’t seem particularly helpful!  When I didn’t follow her instructions she tried again and again, jaws clenched, “Recalculating, recalculating…”

The detour route kept going and going. I still wasn’t going toward the north. Should I deviate from the detour and take my nagging gps’s suggestions? Should I instead resort to my instincts, which in areas of direction, are highly suspect?

Driving home in the opposite direction, it struck me I might practice some leadership. I could choose to make the choice to trust the highway man who posted the signs. Surely he knew what he was doing. I could maintain my purpose of getting home. I could practice holding steady in the face of unfavorable circumstances: the gas tank was dipping lower and lower, the directions weren’t clear, my cell phone was slowly dying and my charger was no longer working, my youngest daughter was expecting I’d be home by the time she got home from school.

By and by the road dipped to the north and the detour signs dictated I turn left and then right again and finally I made it back up to highway 77 to Junction City and the familiar I-70 freeway toward Manhattan and more importantly toward home! The detour felt like forever but probably only lasted twenty minutes. Funnily enough returning to highway 77 I found myself literally just on the other side of Herrington. All of that detour was to keep me from entering and crossing a tiny town that couldn’t have even been a mile wide!

It’s good to trust the detour. When they plot those out they have good intentions, they know what they’re doing, they see what needs to be avoided. From their vantage point they really do know the best way around Herrington. I can relax. I can hold steady. I can trust the detour.

A “Yield” sign might have been a better choice of signs. Yielding is hard work. Everything in me is wired to resist. I want to fight it, rebel against it. My soul’s spine stiffens. I’m often stubborn and suspicious. However when I stopped bridling against the detour signs and yielded I found myself relaxing and resting. Anxieties began to wilt. Trust stood taller. I submitted to the process and it was somehow easier. Maybe they should have instructed me to yield to the detour.

As ridiculous as this sounds, I started to hate Herrington. Herrington was mean. She said I couldn’t come in and play. She taunted me with the hope of a full tank of gas but then took it away. Of course really this had nothing to do with Herrington. She was innocent. Wounded roads likely needed repair. Perhaps a bridge was out. Perhaps a railroad needed attention. It wasn’t her fault and it wasn’t against me personally. It would have benefitted me to suspend my unnecessarily harsh judgment of the unsuspecting community. I suspect it would have quickened my acceptance of the situation.

I’m embarrassed to admit that my friend, Nate, had warned me in a decidedly understated way, about the detour around Herrington. I should have asked more questions. I should have listened more intently to what he said. I should have heeded his Herrington advice.

I also should have had a map…a real paper atlas road map. It would have given me a sense of the big picture. It would have quieted some of my angst. I might have felt more confident in navigating the back roads of Kansas. I would have realized that I was really close to my friend Sarah’s house. I could have popped in for coffee and direction.

If I’m being completely honest the drive south of Hetherington was beautiful but it wasn’t spectacular. I did have that thought….well maybe I’m being detoured to reveal some splendor of nature that I might have otherwise missed. But there was nothing remarkable about that bit of road. There was, however, a quieter more subtle beauty along the way. I passed field after field of varying fall shades of sorghum. I saw a long-legged heron drinking quietly at a pond. I caught glimpses of elusive monarch butterflies. Blinded by resentment and fear, I nearly missed all of it. Relaxing into and learning to trust the detour process freed me up to pray, to ponder, to be present.

Before long I made it to Junction City with 18 gallons of gas to spare. Eventually I even found home again, having travelled the road much much less travelled, with a sense of gratitude and a newly developed deep respect for the detour.

Do you have difficulty respecting the detour?

5 thoughts on “Respect the Detour!” 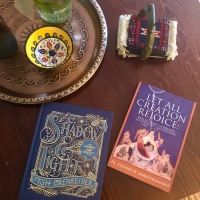