Moving is hard or This too is India by Robynn. Today’s piece is longform – and you will be glad you read it. Especially if you are in a move or frequently support those that move. You can follow Robynn every Friday in Fridays with Robynn. You can also follow her on Twitter at @RobynnBliss

Our family is moving this summer. It’s the shortest move we’ve ever made but in someways it feels the most daunting. We’re simply moving four blocks away and yet the process of packing and sorting isn’t greatly diminished. I wonder if moving will be hard this time too? Since we’re not really leaving the neighbourhood I wonder if much will change? I wrote this for others whose move involves actually leaving the city, or the state, or the country but perhaps I’ll need to re-read it in a couple of months time.

When we moved from India to the United States, 7 years ago, we were astounded by how difficult it was. Packing up a family of five had been stressful. Leaving one beloved country, travelling through two more en route before unpacking in a fourth was tiring. However, settling in was shockingly hard. I wasn’t expecting it to be like that. This was America. Things were supposed to run a little easier.

Part of our job in India was to welcome new expatriates and help them settle into the chaos of our North Indian city. We answered thousands of important questions, we walked people through hundreds of frustrations, we held their hands, we cried with them as they grieved their losses, we laughed at their surprises and delights and celebrated each of their new discoveries. It was an intense part of our lives there.  During that time we heard repeatedly of their frustrations with the Indian systems. Bureaucracy was a nightmare. Systems didn’t work. Loopholes were deeper, thicker, higher, and impossible to jump through.  Simple errands were complex. Nothing made any sense. The newly arrived were often angry, frustrated and exasperated. India was blamed for most of their troubles.

I’m not denying how agonizing it can be. Original copies of this certificate. Photocopies of that form. Four copies of passport-sized photos. Notarized copies of this application. Signed duplicates of that original. Go there. Get that. Return there. You still need this. The office is closed on Tuesdays. Office hours on Fridays are limited. It was often ridiculous and relentless. But I’ve come to see that very little of it was actually India’s fault.

Enrolling our children in school was also confusing. We had to have copies of their birth certificates (which birth certificate? Two of our three children have three birth certificates each!) and copies of their immunization records (which were unreadable and confusing and had to be redone by the local pediatrician’s office).  I didn’t have an American social security number at that time. My Canadian social insurance number confused everyone as it didn’t fit into the prescribed number of boxes. It was awkward and embarrassing. It wasn’t just my identifying number that didn’t fit into their boxes….our whole family seemed to be out of place.

I recently read a well written piece by a woman who was reflecting back on moving with her young family to a foreign country. I found the article a little annoying, if I’m being honest. Somehow it felt like the new country, let’s call it Papua New Guinea, was blamed for all their struggles. Her children struggled at settling in. Papua New Guinea was blamed. She and her husband struggled with the guilt of bringing their kids to this new and strange place. Papua New Guinea was blamed. As I was processing it with my friend Marilyn, I wrote, “It’s really an unfortunate piece. The fact of the matter is any move is hard on every member of the family. Just ask Jill about moving their 10-year-old and 6-year-old from Kansas to New Mexico. It’s hard to move. Period. It is a really narrow perspective to blame a cross cultural move for all the troubles you and your kids will have. Life is hard. Parenting is hard. Moving is hard”.

Two years ago, my good friend Jill and her family moved from Kansas to a nearby state, New Mexico. They transplanted their two young children and all their earthly goods to that new place. Both Jill and her husband were familiar with the city they moved to and yet it’s been a very difficult transition for them. They didn’t leave the country. They didn’t need to learn a new language. And yet…nothing is the same there. They’ve struggled to find a new church. The school system seems strange. New doctors, new hair stylists, new rules, new systems, new neighbourhoods, new friends. It’s been hard.

In a major move it’s easy to idyllically reinterpret your past. It was so much easier when we were there. Remember how fun that was? Remember how tasty that treat was at that restaurant we loved? It’s much harder to be present where you are, especially when where you are is new and strange and your responses to it are less than perfect. You aren’t the same person you were there. Your marriage looks different. Your parenting changes. But it’s also true that had you stayed where you were you still wouldn’t be the person you had been. You’d be older. Your marriage would have taken new turns. Your children move into the next developmental stage. They have new growth spurts and hormones and rebellions, new friends, and new circumstances. Everything is constantly changing. Resisting the temptation to blame the new location for the new you, the new (and strange) struggles your children experience, the new pains in your relationships, the new sins that surface in your soul is difficult but necessary.

This new place where you find yourself is a new opportunity to grow. There are fresh beginnings and unfamiliar experiences ahead. Train yourself and your children to be here now. Present and stable. Certainly there is value in remembering….but focus on remembering how faithful God was in that old place. Recall some of the hard things from that last chapter. Call to mind how you managed to get through it. Remember circumstances that were foreign and frantic. Remember how the Peace that few understand melted over your family then. And then be assured that it will sustain you in this new place too. That hasn’t changed.  The mercies of God, which were new every morning there, will also be new every morning here.

I’m not for a minute trying to minimize the pain of a move. It is painful.

There are a thousand losses. Nothing remains the same. None of your previous routines and systems seem to translate. Everything must be relearned. It’s very very hard. And it takes far longer than you think it will to truly settle in and be at home. But there is little to be gained for blaming the place for the heartache and dis-ease you feel. Pain is always an invitation to grow deeper. Jesus meets us in our pain and offers to lead us through it. Through to the other side of settled. Through to a new normal. Through to a new sense of home and being settled.

And who are we kidding….

This too is India!

16 thoughts on “Moving is Hard or This too is India” 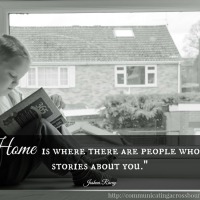