Today is Part 2 of the series on Iran. If you missed yesterday’s feel free to click here.

For those of you who have had the privilege to sample Iranian/Persian cuisine you are definitely in for a treat. Before I left my good Iranian friend, Payman, said, “You will be served more chelo kebab than you have ever been served.” Now chelo kebab is a national dish in Iran, with small pieces of beef, grilled with sumac (a lemon-like spice) and served over saffron enhanced rice and whole grilled tomatoes. I laughed at my friend and said, “Could one ever get tired of chelo kebab?” Well, his prediction came true. After each delegation meeting and even in the evening we were treated to sumptuous meals of chelo kebab kobideh, rice, salad and occasionally fesinjan, a chicken stew with walnut and pomegranate sauce. By the end of our trip we were ready for a break from chelo kebab.

WHERE HAVE YOU BEEN?

Our trip was primarily focused on delegation meetings, rather than tourism, but after one meeting we were taken to the main Tehran Bazaar. As we piled out of our vans, accompanied by 3-5 “handlers” we first stopped for refreshing hand-squeezed pomegranate juice. We were all in our suits and ties and began our walk towards the main bazaar. Iran does not have many Western tourists and even fewer Americans that visit. So you can imagine the looks we received. At one point an older woman asked one of our delegates if we were from Germany. She said, “Na, ma az Amrika ast” “No, we are from America.” The woman took her hand and said, “Welcome, where have you been? We have been waiting for you for 32 years.” It was a genuine expression that was to be repeated over and over during our time in Tehran and Qom. Iranians seem to be tired of the isolation of their country from much of the world and would like there to be more interactions.

Someone asked me upon my return if I had witnessed women being “oppressed by Islam”. It is not the first time I’ve been asked this question by North Americans when they find out I have both lived and traveled extensively in the Muslim world. From my view people seemed genuinely happy and relaxed in society, interacting with each other freely, observing cultural norms of modesty. All women had their heads covered with fashionable scarves and most showed some forehead locks, some even with super-stylish curls. Most were modestly dressed with their manteau (covering to their thighs) or dresses. When we visited the holy city of Qom, about 2 hours from Tehran, all of the women were in black chadors with no hair showing. But we saw many women interacting with men in every day life and even saw women working in the bazaars.

One of our ‘handlers’ pointed out a situation one day in the area called Darband where four young women were put in a police van and were going to be taken for questioning. In front of the van were four bored policemen and two serious morality policewomen in full black chadoors, zealous in their job of upholding the modesty of the young.

During our stay we learned that Tehran was the “nose-job” capitol of the world with over 90,000 nose jobs a year performed. We saw Tehrunis proudly strutting with bandages on their noses, both men and women alike. My wife always said that God made Iranian women the most beautiful in the world and left the rest of the world to fend for itself. What a surprise to find that with some of these women God got a little help in the form of a plastic surgeon skilled at crafting noses.

SHI’A CLERICS WITH A SENSE OF HUMOR

I have to admit that I was most interested in meeting with Shi’ite clerics on this visit. I certainly had perceptions of them being intensely spiritual and serious men. As we went from meeting to meeting we started to interact with more clerics. What struck me most about these clerics was their deep passion to connect their religious intellect with the passions of their heart and with culture and education. We had very honest and candid conversations about faith and the intersections of Christianity, Islam and Judaism. But what surprised me the most was the sense of humor that they had. At one lunch I sat across from two clerics, one with a black turban and one with a white turban. We discussed a variety of topics when I posed to them, “Can you tell me of the religious significance between the black and white turbans?” The cleric leaned in and said, “Well, it is because I have a black heart and my friend here has a white heart.” They laughed and then explained to me that those with black turbans were sayyeds, direct descendants of the Prophet Muhammad. The cleric in the white turban said about his friend, “He is a descendant of the Prophet Muhammad, and I am only the descendent of the Prophet Adam.”

After our lunch conversation the black-turbaned cleric said to me, “You must stay in Iran. We will keep you here with us. We can find you an Iranian wife.” I replied in Arabic, “Haram alayk, God forbid, I already have a wife and one is most sufficient.” They laughed and made the offer again. We posed for pictures with them and were told to come back and visit and bring others with us for more dialogue and discussion.

One day our delegation traveled for two hours to the holy city of Qom. It is like the Vatican for Shi’ite Muslims and seat of great learning and pilgrimage. We met with clerics and academics at two universities and was welcomed into their midst. We had candid discussions about religion, theology and practice among Muslims, Christians and Jews. We were given a private tour of the holy shrine of Fatima Masumeh, the sister of the 8th Shi’ite Imam, Ali Reza. We were able to see faithful pilgrim come and venerate this shrine along with the tombs of other religious leaders and teachers buried there. It was a great privilege as non-Muslims to enter into such a sacred place for Shi’ite Muslims.

Thursday and Fridays are government holidays in Iran, so on juma’ (Friday) we were taken on a tour around Tehran. We stopped for lunch at the International Ferdowsi Grand Hotel. We were told that we were being taken to a “traditional restaurant”. It turned out to be called Traditional Restaurant. It was decorated with large wooden chairs covered with Persian carpet squares, large wooden tables and large brass samovars around the room. Through the middle of the restaurant there was a large fountain and river. A sumptuous buffet table was laden with Iranian appetizers, rice, vegetables, fish and chelo kebab! They served us the most incredible bread I’ve ever eaten called sangak, a large rectangular flatbread that had been cooked on hot rocks.

Against one wall was a raised dias with 4-5 musicians setting up their instruments for a live traditional music performance. After our delegation was seated at two large tables we noticed a large influx of guests, mostly women. We were told that a wedding reception was taking place. As the live music started, a man in a leisure suit and coiffed hair began to croon before the crowd. Anyone who knows me, knows that I love music and that I love to dance. As the music started, the drums beat and the accordion accorded (?) I started to move my hands and hips to the music. My Iranian handlers found this most amusing. I went up to get some food at the buffet and was entranced by the music. I went up closer to the performers and took a short video. The wedding singer then motioned for me to come up, biyah, and I set my plate down and joined him on the stage and began to dance. The women from the wedding party started to clap and egg me on. I didn’t need a more encouraging audience. I danced and moved and noticed the camera phones of my handlers take pictures across the distant room.

After the song ended I left the stage and returned to my table to continue eating and enjoying the wedding festivities. When it was time to leave I met in the foyer a young man dressed in a trendy blue suit jacket and jeans. I said to him, “You have the best suit at this wedding!” he leaned closer and stated, “I’m the groom.” We laughed and talked for a while and took pictures together. When I left the restaurant he thanked me for dancing at his wedding.

Join us tomorrow for Part 3 as Cliff writes about Khomeini; mosques, churches and fire temples; and the effects of sanctions on Iranians. 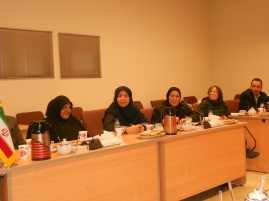 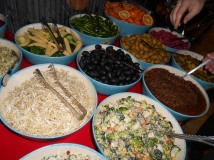 19 thoughts on “Behind the Persian Curtain: An American in Iran: Part 2”