Yesterday I read an interview  in Leadership Journal – an interview for which I was grateful. The woman interviewed is Amy Black, a political science professor at Wheaton College in Wheaton, Illinois. She has recently written a book called Honoring God in Red or Blue: Approaching Politics with Humility, Grace, and Reason.

Word is that several publishers refused the book – what sane company wants humility and grace when pride, animosity, and disfavor sell so well?

The posted piece is short and well worth your time, but what shouted to me from the page was this: “If someone takes a Bible passage and directs it to a specific public policy and says, ‘See, God says this is right, or God says this is wrong,’ I don’t think that’s a proper use of Holy Scripture. I think a proper use of the Bible is to ask, ‘What does this teach us about God? How does he act in the world? What matters to him?’ In other words, the pastor should be equipping congregants to read the Bible and to understand the story God is telling.”

And on election day, no matter what the outcome, God’s story is still being written.

There are many Christians whose politics I disagree with, many who I want to challenge, but if I don’t do it with grace, with humility, with reason, then I am forgetting the Story. I am forgetting that God’s heart is for people and redemption, not for a culturally based political process.

If my faith is dependent on the results of an American election than I am seriously misguided.

In closing, when asked if she had “any cautions for Christians hoping to change the culture through politics”, Dr. Black said this:

“We should be fully engaged in the political process. At the same time we must remember that government is by definition imperfect, because it is an institution made up of sinners. And sinners do sinful things. Government is certainly capable of achieving good things. And we have a wonderful, resilient form of government. But if we start to look at our government to accomplish what only God can, then we’re setting ourselves up for disappointment. I think sometimes people get this attitude like, Well, God’s on my side, therefore everything I fight for is right. But even when we take principles from God and apply them to the political process, we’re still applying them in our broken, fallen way.” 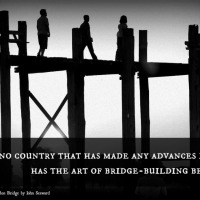