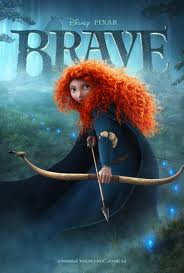 These seven words are my “less than 140 character” review of the movie Brave. I loved it. Trust the creative minds at Pixar to develop a plot that combines a strong female character, a mother-daughter relationship and a look at breaking with tradition, churning it all together into the magical movie that is Brave.

We saw the trailer for so many weeks before the movie was released that we had memorized the lines; the more memorable ones being “If you had the chance to change your fate, would ya?” said with a lovely Scottish lilt and “I’m Merida and I’ll shoot for my own hand!”

If you had the chance to change your fate, would ya?

To briefly summarize, the princess Merida is the eldest child of her parents (King Fergus and Queen Elinor) and the time has come for her parents to invite suitors to compete for her hand in marriage. Being a free spirit she’ll have none of it and seeks to find a way to change her mother’s mind. The result is a change she never intended, resulting in consequences that make for a clever plot, an evolution of the mother-daughter relationship, a challenge to the custom of arranged marriages and the “growing-up” of a girl.

Merida is delightful as the strong-willed, red-headed heroine, as skilled at archery as any man, an agile horse rider and full of personality. In true Pixar fashion, the characters are so cute that you want to eat them!

As one who goes to the movies to feel something I was not disappointed – rather I was enveloped in the emotions of the film. It helped that Julie Fowlis, a Scottish musician, took me into another world with her Celtic song “Tha Mo Ghaol Air Aird A’ Chuain”.

I realized as the movie drew me further into the plot that I wanted my daughters there with me. Most mom/daughter relationships go through their stages of connection, disconnect, and finally a hope of reconnect that will transform into a unique friendship. The film was a beautiful picture of coming to terms with the differences that can present themselves between mothers and daughters; those that threaten to destroy, particularly when emotions run strong. Yet when worked through, they make the bond more enduring. Coupled with that is the quiet pride that a mom feels when she sees her daughter become a woman in her own right, displaying strength and resolve, those life gifts that take them so far. The part during the film where you know Queen Elinor is feeling this sentiment is captured with great humor but telling you would be a spoiler so I’ll leave it at that.

So to Annie and Stefanie – My brave girls-turned-women – When we’re all together in a few weeks we’ll go see Brave. And I am convinced that both of you, like Merida, will “Shoot for your own hand!” and hit the target.

16 thoughts on ““If You Had the Chance to Change Your Fate, Would You?””