For a long time I have wanted Cecily Thew Patterson to write a guest post for me. I first met Cecily when I returned to Pakistan with my husband and we were working at the boarding school I attended through high school. At the time Cecily was a pretty, outgoing girl who already had the marks of a strong woman. Cecily is now a beautiful and strong woman.  I hesitated asking her for a post because I know she has several writing projects going on, as well as many other hats to wear. But today I get to introduce you to Cecily and her writing as she takes us into a struggle many of us have – the poverty challenge. She shares personally and poignantly from the perspective of someone raised in Pakistan.

Like Marilyn, I grew up in Pakistan. Like Marilyn, I also went to boarding school in the Himalayan mountains. And I’m guessing that I was like Marilyn in the way that all junior high kids resemble each other. We all have to work out who we are by facing challenges. Some will make us grow and fly and others will make us stumble and fall.

Clothes were the challenge that made me stumble and fall.

While none of us were wealthy, some people in our school did better than others in the clothes department. I felt like I always had trouble trying to look nice. There weren’t any western clothes shops in Pakistan, I didn’t have a lot of things sent out from Australia, so whatever I could get that was a bit fashionable was really precious to me. I couldn’t just replace a ripped shirt or update old shorts. I had to take care of my stuff. I really wanted to look nice and fit in so I tried hard.

The reason I was at boarding school was because my parents lived in the Sindh desert in a tiny village. There were no local schools for me to go to so my brothers and I went away to study. Even though our school was not in a well-to-do area of Pakistan, and there was plenty of poverty around us, it was still always a big shock when we went home to the village for our three-month winter holiday every year.

The poverty in rural Sindh is confronting. People are extremely poor, many living in traditional mud huts. There’s no power and no piped water and not much transport. Everything is done by hand. Some people my parents knew were so poor they couldn’t afford to eat more than twice a day. They didn’t even have any sugar for their tea.

Most people had two sets of clothes; one for every day and one for weddings. And because the weather was extremely hot for nine months of the year, many people didn’t have any clothes that would keep them warm in the winter.

An opportunity came when we went out to a town called Mithi to visit some friends. This family had brought in a big load of second-hand jumpers and jackets and were going to give them out to a few specific villages that were really poor.

I was excited to be invited to join in. This was going to be my first real hands-on experience of helping people in dire need and I was feeling nervous but also a bit righteous at the same time.

Out we went one evening in the landrover to the villages. We gave out all the jumpers and sweaters. But then we realised there weren’t enough for everyone. Some people had to miss out.

And then someone tugged at my sleeve and pointed to my jumper. I didn’t speak her language but I knew what she was saying. “Can I have that jumper?” she asked with her expression and her body language.

I was shocked. I was wearing a turquoise sweatshirt that I loved. It had come from Australia, it was my favourite colour and it went with heaps of things. I only had six sweaters and this was my best one.

But the woman tugging at my sleeve was asking if she could have it. She had no sweatshirts and there were more people in her village who had none as well.

Throughout junior high school I met a lot of challenges and many of them were opportunities for me to grow and fly. This woman, tugging at my sleeve, was the challenge that made me stumble and fall. Flat on my face.

I gathered myself up and I moved into the landrover where she couldn’t reach me. I talked to myself and told myself that it was ok, that I couldn’t be expected to give up my own sweater, that if I had given it to her my mother would have been cross because she couldn’t have replaced it, that I needed it for school, and besides, it wouldn’t be good if I didn’t look after my own things. I told myself that the woman would be okay, that she was probably just a ‘taker’ and that she shouldn’t have asked.

I still wish, 25 years later, that I had taken off my turquoise sweatshirt and given it to the hungry, thin woman who asked me for it.

And I’m still struggling to know how to respond when I come face to face with real people who have bigger needs than I do. I wish I was more generous, but I’m scared of what might happen if I am. Pray for me.

How do you respond to poverty? How have you responded? It’s a hard but necessary conversation so join in through the comments.

Author Bio: Cecily Paterson is trying to live an uncluttered life, although she feels like she’s behind the eight-ball to begin with in having four children and a recalcitrant dog to feed and keep happy. Cecily is an author, most recently of Love, Tears & Autism, a memoir of the five years following her son’s diagnosis with autism. She’s a fan of honesty and candour and always tries to tell the truth. While she grew up in Pakistan, she’s very happy now to live in small town Australia and would prefer not to move for a long time. Cecily blogs at Cecily.Mostly. Check it out!

41 thoughts on ““I Stumble and I Fall” – the Poverty Challenge” 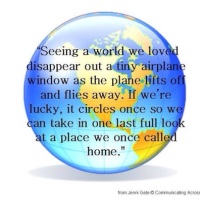