Every once in a while I am given the gift of understanding a fraction more about the incarnation and incarnational living. Over this past holiday I experienced one of these fraction gifts.

Prior to going to Cairo we were asked many times “Is it safe?” “Are you sure you should go?” The queries grew more urgent in tone as Egypt began making news headlines the week before we left. While I believe that safety is a relative term, I appreciated the concern.  But safety didn’t enter into our decision. We wanted to see our oldest daughter and experience her world. Where did she live? Shop? Eat? Who were her friends? What was daily life like? What are her current joys and struggles? We wanted to experience these because we love her. We don’t want to be absent from or oblivious to her world.

It was this epiphany of sorts that struck me as I entered gladly into her world. That God, in his love for us, wanted to experience life as it was like for us with our human bodies and boundaries. That he entered gladly through the person of Christ to live out the joys and struggles of life locked within the limitations of the human body. This is the story of incarnation.

Through visiting Annie and entering her world I know more than I ever could from talking with her. I have met her friends – I know their names. I have seen where she lives – I know she is on the 9th floor with a view of the Mokhattam Hills. I know she has an elevator that can break down and send the passenger into a raw fear. I know the places where she eats and shops, I have seen the faces and eyes of men who ogle her and know the blind rage that she has felt at being seen as an object, nothing more than a piece of meat. I experienced the boundaries she lives with as a single woman in a predominantly Muslim country. I saw the limitations she has in the area of the city where she lives, where barbed wire and walls are placed without notice blocking movement. I felt her frustration with the nonstop crowds when she feels she needs space. I learned about her world. I felt what she felt, saw what she sees, ate where she eats and walked the steps that she walks. I had the joy and struggle of being locked in her world.

I have not just heard about her life, I have experienced her life, walking with her through her neighborhood and beyond.

A couple of years after the 9/11 attacks on the twin towers, there was a terrorist attack on the International Church in Islamabad, Pakistan. There were several of our friends present in the church that day, one was the father of Robynn Bliss who readers know from several guest posts. Another was a friend of ours who was there with her husband and small children. In the attack she shielded her small child from flying shrapnel and was severely injured in the process.  In a poignant letter describing the event, she tells of her response. “I had always thought it was ‘hard-nosed’ of God to allow His son to be offered as a sacrifice for us and experience the pain and death of the cross instead of us”. She went on to say that in that moment, protecting her child was her greatest joy, the thing she wanted to do more than anything. To save him despite the cost to her  – a severe injury and punctured lung. In wonder she realized that it is God’s great joy to send Jesus – who wrapped his body around us as it were, so that we would be saved from the sin shrapnel that would kill us.  The cost for her was great, but nothing in comparison to the joy of saving her child.

The wonder of incarnation – whether understood through walking in the shoes of a daughter and understanding her world, or protecting a child at the cost of great injury and potential death. All of these are picture gifts to help me in my finite mind and ability to understand a fraction more of  the mystery and wonder of the incarnation – to comprehend a bit more of the ultimate love that walked this path willingly. Fractions of understanding – not a full picture but an important piece of the whole.

He who did not spare his own Son, but gave him up for us all–how will he not also, along with him, graciously give us all things? Romans 8:32

9 thoughts on “Fractions of Understanding” 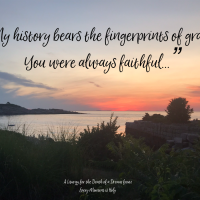