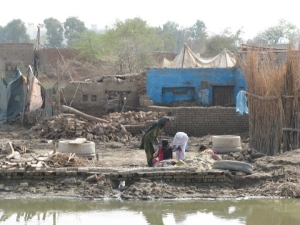 On October 15th I embarked on a medical flood relief journey to the country of Pakistan.  At the time I did not have a blog and was able to write only a few reflections because the work was busy, and I wanted to be fully present.  Much of what I saw, I believe needs to be shared.  Journalists and main stream news sources forgot this story long ago – it is up to those who care and have seen first hand the displacement of people and human need to communicate what they saw, felt and experienced.  Today is part one of a 5 part series that I will be doing this week.

I looked out the window of the van that had picked us up from the Sukkur airport just a half hour before.  On one side lush fields of rice, on the other barren dry land interspersed with tents set up by various relief agencies in the region.  The tents advertised their particular relief agency through signs – one reading “To the people of Pakistan from the people of the United States; USAID“, and another Swiss Red Cross.  We were frequently passed by every kind of vehicle, some motorized and others donkey or ox carts, piled high with belongings of those returning to homes and villages, dreading what they would see when they got to their destinations.

I wanted to pinch myself, hardly believing that I was back in a place that I had called home for over 22 years of my life.  It was real – I was back in Pakistan heading to Shikarpur for 2 weeks participating as a nurse in Medical Flood Relief for Internally Displaced Persons.  The floods had begun in late July and increased in intensity and devastation through out August.   I was with Carol, one of my best friends, one of the best nurses on the planet and as an added bonus -my sister-in-law.  How we had gotten to this point was a story of grace and generosity and we were ready to work and give what little we felt we had to the ongoing relief efforts of the area.

Arriving in Shikarpur at the Christian Hospital Compound, we were shown our rooms, showered, and fell into a jet lag sleep.  We were woken up in order to meet the Dutch physician we would be working alongside and were briefed on what the days may look like.  The plan seemed simple:  We would be briefed on what camp we would be going to and head out with male escorts, a Sindhi interpreter (Rosina) a Punjabi community health worker (Rohanna) two nurses (that would be us) and Dr Wendell, a delightful 36 year-old doctor who had come 2 weeks prior. Our days would be long with no breaks.  Take water, take snacks, be flexible were the rules.

Less than 12 hours later, dry statistics read prior to coming became human faces with names and needs too numerous to count. As I fumbled through dusty boxes searching for Ampiclox, Fansidar, Doxycycline and many other drugs that I was not totally familiar with I marveled at my own incompetency with the silent musing:

and I thought I was sort of smart and capable!”

The first camp broke us in kindly – Only 35 people to be followed by more at another Baluchi village close by.  Between keeping on my dupatta so I wouldn’t appear culturally inept (actually, so I wouldn’t feel naked!), swatting off flies, keeping hydrated, and deciphering dear Dr. Wendell’s handwriting I was exhausted after a half hour.  Relieved that we didn’t have watches so we wouldn’t appear to be counting the minutes before we could get back to the safety of our room,  Carol and I worked together trying to figure out some system of efficiency in order to fill medicines and keep the people flow going.  Somehow we made it through 30 cases of malaria, 15 malnourished kids, and 35 in need of general vitamins, cold medicines, and scabies lotion.  Our orientation was over – the next camp we would have to prove that we really could do this work.

It is a healthy feeling to go from a place of capability and strength to a place of incompetency and weakness.  And that is exactly where we were on Day One of this venture.

Just prior to publishing this post, the NY Times published an opinion piece called “Around the World in 12 Months”.  July features Pakistan in an article titled “God and Mud”.  Perfect reading for those of you who are interested in more information from other sources.

24 thoughts on “Series on Pakistan: Orientation” 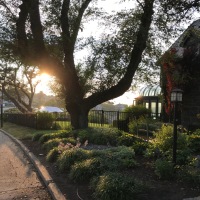 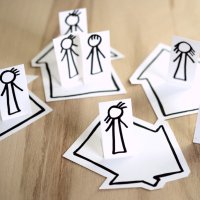